"And why do you worry about clothes? See how the flowers of the field grow. They do not labor or spin. Yet I tell you that not even Solomon in all his splendor was dressed like one of these. If that is how God clothes the grass of the field, which is here today and tomorrow is thrown into the fire, will he not much more clothe you-you of little faith?" Matthew 6:28-30

Yesterday was an extremely discouraging day. Joe and I have been saving for a new car since the day we got married. After two years and 5 months, we’ve managed to save a small but reasonable down payment. The plan is to sell his VW Bug, he’ll take my Toyota and I’ll get a new car. Eventually.

We thought we were going to be able to get a new car before the end of the year. But about two weeks ago, the Toyota started making some strange noises. They were intermitten, and I ignored them praying they would just go away. Instead, they go worse. The performance of the car wasn’t affected at all, so I was hesitant to take it to the mechanic. However, the noise eventually became super obnoxious and constant so I took it in.

The look on the mechanics face when he handed me the estimate was the same look the doctors on Gray’s Anatomy give when a surgery doesn’t go well. I looked at it and screamed a little. The total was almost half of what we’ve saved for a down payment on a new car. What. The. Heck.

There was some pretty serious internal damage to the car. We know the mechanic personally and trust everyone in the shop so we knew they weren’t ripping us off. In fact, they gave us a discount and threw in a free oil change. But it was still heartbreaking to see half of our hard earned savings go into struts and wheel bearings.

After that, the flood gates of emotion burst open. I started thinking about the fact that neither one of us is going to get a raise in the near future, how Joe still has two semesters of school left which means lots and lots of time apart, how depressing it is that at the ages of 25 and 27 we can barely afford a used car much less a house or kids, and how we’ll probably never get to go on that vacation to Australia that we’ve been dreaming of. My mood matched the weather: dark, gloomy, storming and full of raindrop tears.

Yes, we are in survival mode. This may be temporary or we may spend the rest of our lives just barely getting by. And I’m sure I’ll have many more discouraged and frustrated days in the future. But today I am thankful that God always provides what we need, even if it isn’t always what we want. I praise Him for the blessings He has given us and trust Him for the ones He has yet to deliver.

A friend of mine is getting a boob downgrade. A someone who has always had small boobs, I never really understood why people would purposefully make their’s smaller. I always wanted mine bigger. But she explained that her boobs have caused back problems and she’s sick of spending tons of money on high end bras and swim suit tops from Nordstroms. Apparently, only smalled boobed girls get to experience the joy of picking up a $15 t-shirt bra at Target. Good to know.

Anyways, her surgey got me thinking about what I would surgically change about my body if I could. A nose job? Maybe, but everyone says that my nose is not big, so I think my dislike for it is just a personal issue. Cellulite? Boy wouldn’t it be nice if one surgery could take that away forever. But knowing myself, I’d just keep eating too much icecream and not excercising enough and my cellulite would be back in 6 months. I do really wish I could get a hair transplant. I’m over these thin, listless locks. I want some volume! But alas, I’m genetically doomed in that category.

Then it hit me. I want to get my acne scars lasered off. I think I’ve found a skin care regime that will finally limit my break outs, and I’ve gotten much better at taking care of my skin. I’m pretty confident that if I got the scars lasered off, I wouldn’t get any back. I’m good about putting sunscreen on my face and I wear a lot of hats in the summer. I wouldn’t feel guilty, as if I was taking the easy way out instead of working. I would getting something done that I don’t think can be done without surgery (although now that I think about, I’m sure there are some ways. Anyone care to enlighten me?) and I know I would be a good steward of the surgery and take care of my skin afterwards so I didn’t continuously need the same treatment over and over.

So, if anyone has a $500,000 they want to give me (I know surgery doesn’t cost that much, but I would feel guilty getting surgery without first getting a car and buying a house. $500,000 should cover it all) I’ll get right on that skin laser surgery.

What’s one cosmetic surgery you would like to have? Tell me in the comments below. Or tell me I’m a terrible person for considering such a shallow thing. Whateves.

Not really, I heart the beach, but I thought claiming to love seaweed would get your attention :). This is dedicated to you readers. I ❤ you  and am so thankful you keep coming back to hear me babble on. 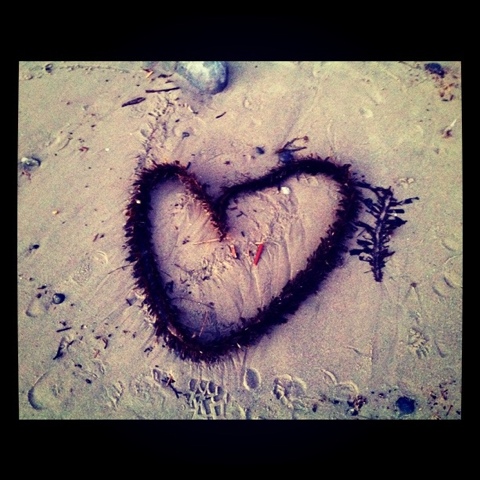 A little birdie told me…