First off, let me say that I appreciate the opposing and affirming views on my last post. Everyone brought up some really great points AND they did it in a respectful manner. Yay! Honestly you can disagree with me all day long on every topic and as long as you are respectful and don’t call me names we can still walk away being friends. I intend to respond to all of the comments, I just need to find time to think through them and respond to them thoughtfully. You guys took the time to write great content in your comments, I would like my response to be as equally thoughtful.

Camping is one of those things that tests relationships. Be it family, friendships or marriages, all relationships are either strengthened or ruined by a camping trip. Luckily, my relationships with the five other people on this trip, including my husband, were strengthened. There were times though, when it was a little iffy.

This tale actually starts the day before our trip. I woke up to find a GIANT spider bite right where butt and thigh meet. I haven’t ever had a bite this big. I was worried, but since itching was the only symptom I decided to wait before rushing myself to urgent care. I wanted to monitor its size, however, so I drew a circle around it with a sharpie. That way if the bite grew out of the circle I would know that it was getting bigger. I thought this was a great idea but so far everyone who has heard this story has laughed out loud and told me that I’m wierd.  Whatever.

I woke up at 2:00 AM the next day to get ready to leave and the bite was definitely bigger. Greeaaat. I didn’t know what to do about it so I just drew another sharpie circle and packed up the truck. We hit the road at 4:00am. At 5:00am I asked Joe if he had packed the lunch meat and the jelly. He hadn’t. Sweet, we were in charge of food and we forgot everything we needed for all our lunches. Well, I guess that was our way of getting even with our friend H for making a camping reservation that was 6 1/2 hours away when we only had three days to camp. So the journey continues.

We were driving through northern CA in the Salinas Valley. There were lots of wineries so we stopped by one and did a wine tasting and had a picnic lunch. We had stopped at a store earlier and gotten lunch meat and jelly, but when we opened the cooler we realized there were no condiments. Epic fail #2. We ended up having turkey and jelly sandwiches which were actually quite delicious. How does that saying go? Desperation is the mother of invention?

We took one more detour and visited the John Steinbeck Museum. I love John Steinbeck. C, H and I all read East of Eden together in our book club so we were especially stoked to be going to the museum together.

Great Steinbeck quote. There were so many of them at the museum, the man was a literary genious 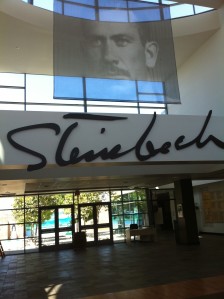 entrance of the Steinbeck museum

When we finally arrived at the campsite at 4:00pm, we were pretty tired. Which is good, because I didn’t have the energy to be upset about the fact that there were NO SHOWERS ANYWHERE and that the nearest bathrooms were porta potties and that all the water in the campsite had been contaminated with poop so we had to boil it before using it. Being tired also meant that I only had a mini heart attach instead of a major one when my husband backed the GIANT F250 extended cab truck into a tiny parking space surrounded by rocks. Good times.

Day 2, our only full day at the camp site, was pretty uneventful. We had a lot of fun playing in the river and hiking. We made delicious smores and Joe cooked some amazing burgers. O but wait, remember the spider bite? Saturday morning I looked at it and panicked. It was black! The following conversation ensued in my head:

But right before I screamed my woes to the rest of the world, I rememberd that the day before I had put hydrocortisone cream on it and that the cream had probably smeared the sharpie. Further inspection revealed that it was ink, not bruising or gangreen, and that the bite had actually gotten smaller and wasn’t itching at all. It was the opposite of death, I was healing! Crisis averted.

Our third epic fail though was that on our last night we got ready to make chili dogs only to realize we forgot the dogs. Seriously Joe, did you not even think about anything else other than burgers when you were packing? In N Out is getting to your head. Anyways we once again utilized our creativity and put chilli, cheese and crumbled BBQ potato chips on a hot dog bun. Not bad. Although I once again felt a twinge of frustration when later, while sitting around the campfire, I realized that I was the only person out of the whole group that had never planned a camping trip before. Really, you guys let the newbie be in charge of the food? Well you learned you’re lesson.

In all seriousness though, it was a great trip. H and A, who have been good friends of me and Joe for years,  moved to the East Coast a week after this trip, so it was great to soak up a little more time with them. Joe and I didn’t know C and K that well, but we discovered we have a lot in common and will for sure be hanging with them more in the future.  Nobody got mad at us for forgetting so much food and despite the little mini dramas it was a really relaxing trip (thanks, in no small part, to all the booze we brought). And as for Joe and I, we survived our first camping trip together with more laughter than tears and plans to do it again. But we will follow the most important lesson we learned on this trip: MAKE A PACKING CHECKLIST!

The husband and I tried a new burger joint last night called The Counter. Before I begin my review let me preface it by saying we are burger connoisseurs. My husband has worked for In N Out for 9 years and he could go on and on about meat quality and taste. Plus he is a very good cook who specializes in burgers and steaks. Consequently, a burger joint has to be pretty amazing in order to really impress us. The Counter is amazing.

When I walked into the restaurant I got the same vibe as I do from Urban Outfitters. It’s very modern and hip, but also laid back. It looks like a posh warehouse with aluminum chairs, metal pipes on the ceiling, cool blue walls, minimalist art and a really cool window that looks like a garage door. It has a very versatile environment- I would feel just as comfortable taking my young nieces and nephews there as I would grabbing drinks with friends. It is a sit down restaurant, which surprised my husband and I, but it turns out waiters are pretty necessary for the operation.

The premise of The Counter is that customers get to build their own burgers. When we were seated the waitress handed us a menu and checklist. On the checklist we got to mark the items we wanted on the burger. First we picked the meat, then the cheese, four toppings, sauce and the bun. I picked a 1/3 lbs turkey burger with herb goat cheese, cucumbers, sprouts, roasted peppers and pepperoncinis  with a basil pesto sauce. Joe ordered a 2/3lb beef burger with blue cheese, roasted red peppers, grilled onions, jalapeños and pickles.  He ordered BBQ sauce as well but didn’t like it. Luckily, they always put the sauce on the side so that one bad decision didn’t ruin the burger.

Both of us agreed that the burgers were fantastic. The meat was juicy but not greasy. All of the ingredients were fresh and the blue cheese was one of the best we have ever tasted. I was amazed at the variety of ingredients they had. One of the toppings was dried cranberries. I have never thought about putting cranberries on a burger but with the right sauce I think it could work. Their website has the whole menu so you can see for yourself all the exciting combinations that can be made.

Of course, they offer more than just burgers. Hubby and I shared some sweet potato fries and onion strings, both were delightful. The onion strings especially were very flavorful. So many times onion rings or strings just taste like fried batter but these had some delicious spices that gave them an extra zing. They also served various desserts including milkshakes and malts. A full bar rounded out the menu.

The service was just as good as the food. I asked for syrup for my sweet potato fries and although they didn’t have any, a waiter brought out a side of honey. I loved that although he couldn’t give me exactly what I wanted he took the time to find the next best thing. Our waitress was very polite but always seemed rushed. She would often start walking away before she had finished her last sentence. The place was busy, and I would rather have a rushed waitress than a lazy one, but I do wish she had slowed down and made a little bit of small talk.

One last thing, I highly recommend this place to vegetarians and vegans. They have a vegan patty that is made in house and with all the different sauces and toppings they offer, I’m sure you can create the most interesting, delicious vegan burger you’ve ever had.

The franchised chain has 23 locations nationwide, but only one in Orange County. It’s located in the Woddbury Town Center in Irvine. The address is 6416 Irvine Boulevard. Visit the website for hours and other locations.  Then go there this weekend and treat yourself to the second best burger around (we will always claim that In N Out is the best…but we are very biased)

A little birdie told me…